As Martha McSally’s anti-climactic unveiling of her run for Jeff Flake’s Senate seat looms, it is important to listen to the rhetoric change  in her carefully crafted persona. For years, her constituents have tried to nail her down on issues important to them. She carefully controls her message resulting in voters not really knowing where she stands on most issues, particularly when her rhetoric doesn’t match her votes.

But a particularly disturbing trend began when she decided to run for Senate and “leaked” it to her colleagues over 2 months ago.  Trump, whom she had gone to great lengths to distance herself from, was now her new BFF. Laurie Roberts of the Arizona Republic wrote about it best, quoting Arizona Daily Star’s Tim Steller who predicted the Senate run based on the number of Tweets mentioning Trump that the suddenly gushing McSally had published.

What is most disturbing is the change in tone of the tweets and other messages to the public. McSally  previously expressed support of DACA in 2015 when she said

“It is neither practical nor fair to deport young migrants who freely came forward, giving information such as fingerprints and home addresses to our government, under the auspices that they would be given deferred status. Those who came here through no fault of their own, have passed background checks, earned high school degrees, and are pursuing the American dream should not be punished.”

But yesterday in an interview on Fox she may have betrayed her true feelings. The interview was important to push her “bipartisan” immigration plan. But her message was clearly meant for the Nationalist Trump base:

“you see the Democrats are asking for the DREAM Act or nothing — that’s a nonstarter. I think most Republicans are willing to have a conversation about DACA recipients.”

This statement shows how out of touch our Congress is. In many polls (see citation one, two, three) after Trump declared an end to DACA protections to 800,000 people, even Republicans overwhelmingly favored continuing their protections.  If Republican members of Congress want to truly represent their constituents, they need to be more than “willing to have a conversation” about an alternative to deporting 800,000 young people who McSally herself said followed all the rules and only know the US as their home.

In the Fox interview,  she then went on to say“but we’ve got to make sure that we secure our border and that we don’t end up in a situation where we have 800,000 more DACA recipients in one, two, five years from now.”

This is a classic racist dog whistle. It is the equivalent of saying “they are infesting our country” and is meant to rile up the racist base. Additionally, that number has no basis in fact. The number of border apprehensions (the only way to determine undocumented border crossing) has plummeted since the 80s, and even more so since Trump took office. McSally and her Congressional colleagues from both sides of the aisle are using 800,000 American immigrants as a bargaining tool to further their fear mongering about immigrants

This policy issue presents  Martha with an irresistible opportunity. She gets to appear as a hawk on immigration and secures a place on the Senate Committee on Homeland Security once elected. Peddle the fear, offer the solution. Her ambition has been clear to us since Trump took office, as she comments about terrorists only if they are non-citizens and has consistently run on issues of shoring up the border even though her messages have been mixed at best and misleading at worst.

But this sudden change in tone is new. Take a look at the term “chain migration.” This term had its early start in White Nationalist circles, but it was Fox “News” and Breitbart that started pushing the term to peddle their anti-immigration narrative as pointed out on Media Matters here.

So while the trend is disturbing and at times a 180 from prior statements about immigration and DACA, one thing remains clear; we still don’t know where Martha McSally really stands on issues. Her principles seem to change when the political winds shift. Arizonans deserve a better, clearer idea of who their representative will be when they head to the polls. 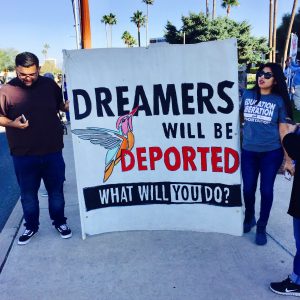