We started this Change.org campaign to ask the Editors of “Cosmopolitan” Magazine to:

“Tell your readers the truth about Martha McSally

Helen Gurley Brown, the long-time editor of “Cosmopolitan,” famously transformed it from a staid family magazine to a frank (sometimes brazen) advice manual for the modern, single career woman.

In 2014, then-editor Joanna Coles expanded Cosmo’s scope to politics, “researching political candidates so you don’t have to.” She announced that only politicians who support the best interests of Cosmo readers (including equal pay, access to abortion, gun control and affordable health care) would receive the magazine’s endorsement.

Based on that criteria, the only way you’d expect to see Rep. Martha McSally featured on the Cosmo’s web site is in a big red warning to steer clear. McSally has a long track record of opposing the very policies that Cosmo says are deal-breakers:

She blocked consideration of the Paycheck Fairness Act, after promising her district that she’d vote for it because it was “the right thing to do.”

She’s opposed to legal abortion, except in cases of rape, incest and to save the life of the mother. She voted to ban abortions after 20 weeks’ gestation.

She has argued that universal background checks for gun purchases would be “absolutely unconstitutional.” She’s also a co-sponsor of the Concealed Carry Reciprocity Act of 2017, which would effectively override laws in states which deny gun permits to convicted stalkers, boyfriends convicted of domestic abuse, and/or those with restraining orders. (McSally has taken this unpopular position in spite of her own reported history as the victim of stalking.)

She voted for the AHCA, which would have gutted Medicaid funding, even as Medicaid covers a majority of the births in Arizona. The AHCA would also have allowed states to strip maternity care, infant care and mental health care (used more often by women) from the list of essential health benefits, which means that women would have to pay more – a lot more – to get that coverage. Moreover, 45,000 people in McSally’s district stood to lose their insurance coverage altogether if the AHCA had passed the Senate.

In other words, McSally is exactly the kind of politician that Cosmo’s editors say they want voted out of Congress. But when given the opportunity to expose her record and educate their readers, what did they do? They ran a glowing profile of McSally written by McSally herself, in which she shamelessly depicts herself as an advocate for the women of her district. Cosmo provided no fact-checking, no context – just the stage where McSally could brandish her smoke and mirrors unchallenged.

That was a great disservice to their readers – one that needs to be corrected.

We are asking the editors of Cosmo to run a follow-up piece on Rep. McSally which accurately informs their readers of the many ways her voting record fails to meet Cosmo’s own standards.” 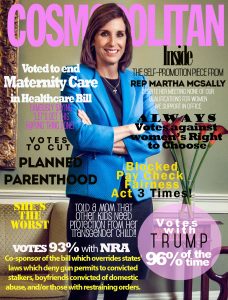