The Arizona Republic reported a bold move by the Congressional Leadership Fund, Paul Ryan’s SuperPAC, to open a field office in Tucson.  The strategy of the SuperPAC’s Executive Director, Cory Bliss, is to canvass in Tucson in order to help Martha McSally in the most populous city in her District. Cory Bliss has had a great deal of success in special elections in several states where empty seats were left by Trump’s cabinet, as reported by Forbes Magazine.  You can read about Cory Bliss here.

What is the Congressional Leadership Fund and their affiliated Non-Pro

The American Action Network is a non-profit that does not have to disclose it’s donors. The Congressional Leadership Fund shares the same Board and Executive Director.  SuperPACs cannot spend money on actual campaigns, they tend to use their millions on advertising attacking the opponents of the candidates they support. CLF spent $632,000 in attack ads against McSally’s opponent, Dr. Matt Heinz, in 2016.

Here is a chart reflecting the flow of money in the special elections in Montana and Georgia, according to CampaignLegalCenter.org

Who are the donors? 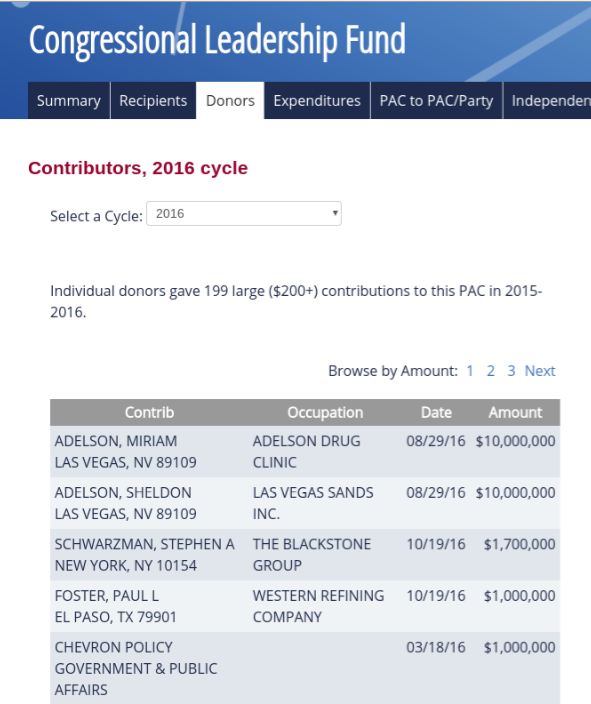 Looking through the list of names and the industries they represent tells you a lot. They represent Wall Street, billionaires, oil & gas,  the most loyal Trump supporters. The list tells a story of who McSally is beholden to.
At the top of the list of donors to the CLF is billionaire Sheldon Adelson and his wife who combined to give $20,000,000. These Sheldons’ tax liability would decrease by $43 million under the AHCA. This is the healthcare bill supported by Paul Ryan, Trump and that McSally enthusiastically voted in favor of in May of 2017.
Another donor, Ronald Cameron, a “poultry magnate” from Arkansas gave the CLF $1 million, and Trump $2 million. As reported by the New York Times he threatened to fund primary challengers to anyone who voted against the health care bill:
“Ronald M. Cameron, a major Republican donor … said he would consider investing in primary race challenges to Republican lawmakers who oppose the health care bill or other White House legislative priorities.”
Some takeaways from the presence of the Congressional Leadership Fund in Tucson are:

1. McSally is in trouble. The SuperPAC wouldn’t be spending money this early if the healthcare vote didn’t hurt her.

2. McSally’s healthcare vote was bought and paid for by billionaires from outside our District. She promised to be an independent voice in Congress during her 2016 campaign, but it looks like billionaires got her tongue.

3. The presence of a field office in Tucson, whose volunteers will canvass door to door is ironic given her distaste for speaking to her constituents. In other words, Paul Ryan’s SuperPAC is funding McSally’s constituent engagement.