..and it felt like all eyes were on us.

No, this isn’t an excerpt from a fairy tale. This is what it felt like as Marion and I entered the large room where the Tucson Metro Chamber was hosting Rep. Martha McSally as their keynote speaker. Marion and I are both business owners, she is a business coach and wholesale artist and I am own and edit a community newspaper. But we are also the President and Vice President of Represent Me AZ Grassroots Super PAC.

I didn’t exactly expect a warm reception, but we were assigned some henchmen to watch us through the speech. Since we were seated in the very back of the cavernous room, henchman 1 had to stand against the wall to keep us two ladies in his sights the entire time.

The second Henchman, we found out later was busy harassing our friend, Bryna, and asking her if she was a reporter. She said that she wasn’t and he asked her why she had a notebook. He introduced himself as McSally’s staffer for Veterans Issues. You can see her account of the content of McSally’s talk in Part 1 of this “series.”

When Marion began shooting video of the welcoming address, our Henchman quickly informed her that there was no video recording allowed, to which she quickly nodded assent and complied. Breakfast was poor fare for $75 a head, but even that was more interesting than McSally’s speech. For anyone familiar with her addresses (unfortunately we both are), she retold the same anecdotes, filibustered with the same onerous detail and made sure to bring up the A-10 a few dozen times.

To keep us mildly entertained, we brought along some McSally Bingo cards we had printed up, and very unobtrusively marked them off (and tweeted the results!). Otherwise, we were just two quiet ladies, sitting in back and occasionally taking notes.

When it came time to hand in our cards with our question on it, our dear Henchman Robert stood up abruptly and snatched the question card the moment it was held up. Whether or not he spirited the card to the circular filing cabinet or if it made its way up to McSally, we will never know.

Martha had taken up so much time going on and on about detail concerning process that she was only able to take three softball and pre-screened questions. Once again, she filibustered the questions and promptly cut off any more dialogue as the hand struck 9:00. She received some award from removing ozone protections…yay. And then the main show was over.

As Marion and I stood in line to try and ask McSally a question, our Henchman approached us.

“Hey, can I talk to the two of you?” he boomed while standing awful close (I have a contagious cold, so I got a kick out of thinking about my cold germs invading his immune system at some point).

“Um, sure?” We both replied weakly, not sure where this was going.

“What business do you own…I’m just wondering,” he asked, demanding rather than imploring. We both told him what we did, which did not satisfy his burning desire to learn more about community newspapers and wire wrapping. The next question ratcheted up the rudeness even more.

“OK. Are you Chamber members?” We answered that we were not, and I was prepared to tell him that this event wasn’t closed, when he surprised me with his next question.

“OK. Did you pay to attend today?” At this point, I was a bit incredulous. Was he accusing us of sneaking in here?

“So, just for future reference, you know you might have other things going on in your life, I do, but this is a Chamber function. But we’re trying to keep this business related.”

“No, I’m just saying that when you show up to a Chamber event that you try not to…that Bingo games, and Planned Parenthoody things…and all that other stuff…” he stammered, but still trying to sound authoritative. All the while his giant body is just a few inches from my much shorter and smaller one.

“Are you saying I’m affililated with Planned Parenthood, because I’m not,” I challenged him.

“I’m here as Connection Newspaper, my newspaper and my business,” I concluded, then proceeded to treat him to The Cut Direct and turned my back on his stammering, sweaty personage looming over me. In a room that large, the space between us was miniscule.

“No..I’m not say…saying that. There was a whole thing online with protests and such…” he continued to stammer.

He skulked back to wherever he could glare at us and continued to keep a close eye on us.

Marion got in line to ask Martha a question and while standing there, McSally’s staffer for Veterans’ affairs on the request of CJ Karamargin, her District Director, moved in uncomfortably close in front of Marion, effectively walling her off from the Congresswoman. Marion tapped on his shoulder saying “excuse me” repeatedly.   He ignored her, all the while whispering to CJ and patting him on the back. A round of applause for Marion, who snaked through their tight embrace anyway to put herself back in line, even as CJ said “Hey Marion! Don’t cut the line!”

As we left the building, we were trailed by our friend Robert, who then parked himself on a couch and watched us for 15 minutes as we chatted with Steve Farley and Kristen Engel (who are both amazingly inspiring and dedicated people).

It wasn’t until we got to the car that I did a good ‘ol google search of our Dear Henchman and found out that he had been arrested and booked back in 2006 for stealing $18,000 from a UA fund when he was President of the Inter Fraternity Council. America really is the land of opportunity, where you can go from a frat-boy thief to a Metro Chamber employee who tries to intimidate two quiet women in the back of a room.

It is also a shame that access to McSally is limited to people with peak work hours availability, $75 and a business. And even if you fit THAT bill, you will be watched, followed and intimidated if you somehow don’t fit in among those with McSally hero worship.

At the end of the day, we GOT access and we GOT a question answered. How many other constituents can say the same thing? 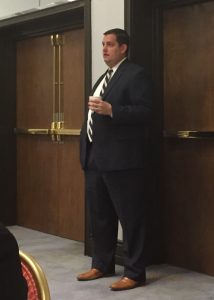 The Metro Chamber of Commerce staffer who harassed 3 attendees