Martha, you almost had me there when you explained why it took you 4 days to condemn a white supremacist terror attack.  Let me back up. As many people know Congress has been on recess for the entire month of August. Martha McSally has used the recess to rebrand herself as a voice of reason in the healthcare debate. The voice I clearly remember is the one that famously said “let’s get this Fucking thing done” shortly before voting for the AHCA. That bill was the very unpopular healthcare (tax cut for wealthy) bill that the majority of her constituents and stakeholders in the healthcare industry begged her to vote “no” on.

During this August recess, the majority of her constituents have been left out of the conversation. We aren’t the direct targets of the rebranding campaign. Instead Martha has been holding small round tables, private meetings, events at schools or private businesses granting interviews to provide cover for that vote by  rebranding herself as a “moderate” working to solve the healthcare crisis. Pictures of these events are posted to Facebook and Twitter creating the illusion of engagement.

We discovered that she was going to be the the speaker at a Tucson Metro Chamber of Commerce event on August 25th. The cost: $75. Well if we had to pay to get access then we would pay. We bought 3 tickets. The event was supposed to be a legislative update, but was instead a self promoting campaign speech. You can read the account of her speech in Part 1 and the harassment we received from the Metro Chamber in Part 2. Given the lack of a true legislative update as the event was billed, and the hefty price tag, I wanted to get my money’s worth and ask my burning question – my $75 question.

After waiting my turn to speak to her, I asked the following: “My concern is regarding your position on the House Committee for Homeland Security. I am concerned about the funds being cut from DHS  to investigate homegrown terror groups like Neo Nazis and White Supremacists.  Will you ensure a full  investigation of these groups and the events in Charlottesville?”

Her response was to tell me that there was a hearing scheduled for September. McSally has a tendency to speak about process rather than state a position, so I had to ask twice for her to assure me that she would commit to fight domestic terror groups. When pressed, she finally said “yeah, it’s important to me too.” I took that as a  yes and ignored the righteous tone. I then said “I have to ask, why did it take you 4 days to denounce the attack in Charlottesville?”  Martha explained that she had been in a terrible car accident on Saturday that totalled her car.  After dealing with that all day it was Sunday before she could focus on a statement and by then she said, it seemed odd to put one out. Then she said  that her aunt died. I said “wow, I’m sorry.” and left it at that.

But the more I thought about it, the more it didn’t add up. First of all, McSally probably doesn’t write her own statements. Her slick Communications Director, Kelly Schibi, is responsible for that. Secondly, as many of the more hardline supporters of Trump pointed out, the killing of Heather Heyer was a terror attack on American soil. Surely, McSally wasn’t so incapacitated that she could not make a statement condemning what appeared to be madness in Charlottesville. A two sentence statement condemning the terror attack and the white supremacist violence would have been a very simple task. In fact, there were example statements from other Republicans she could have used for inspiration.

I continue to reflect on  my demands for statements from McSally wondering if I am too close to the issue of her inability to push back on Trump and the values he represents. But when I saw hundreds of white supremacists marching, saluting and attacking people in Charlottesville and then the terrible attack that killed Heather Heyer and injured several others, I was terrified that our country had reached a point where Nazis were above the law, and our current government would do nothing about it. When I heard the President say that they were “fine people” I was nearly panicked that we were in a country that was no longer safe. But then I read statements from Jeff Sessions, Marco Rubio, and all but 3 other GOP members of the National Security Committee and I felt a little safer. As Tucsonans, we don’t have access to Trump or the damage he is doing by making it unsafe for those of us who aren’t straight, cisgendered white Christians. We only have our representatives who are supposed to be providing checks and balances on the unbalanced.

Secretary of Defense General Mattis said when addressing his troops, “Hold the line until our country gets back to understanding & respecting each other.” It does not appear we can count on you to lead that effort. 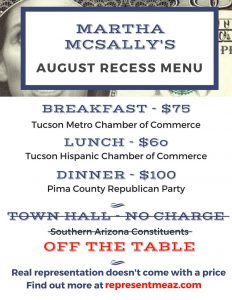