On August 25th I attended Issues Over Easy, an event billed as a legislative update sponsored by the Tucson Chamber of Commerce. Congresswoman Martha McSally, there to provide the legislative update, received the Spirit of Enterprise Award. According to Mr. Jennings Imel, executive director for the U.S. Chamber of Commerce’s Western Regional Office, the award is presented to legislators who voted at least 70% of the time with the U.S. Chamber’s interests. The Chamber adds stickers to a hard hat (part of the award) for those legislators who voted with them 100% of the time. Apparently the Congresswoman has earned one of these stickers every year she was eligible.

Mr. Imel cited two specific cases where the Chamber was enthused to have McSally’s support 1) EPA-related deregulation, and 2) efforts to delay/repeal the Department of Labor fiduciary rule. McSally literally earned a Chamber award for supporting dirty water and air and trying to gut protections for average Americans trying to save for retirement.

The Congresswoman speaks at an incredible pace. As I listened and tried to track her words and meaning, her “go-to” phrases like the A-10, national security, health insurance death spirals, and metaphors comparing her military service to civilian governmental service kept grabbing my attention – and so did what she didn’t say.

She relied on her well-worn military metaphors including the following quotes: “I used to shoot 33 mm at the enemy and now I write letters” and “You never know when you are going to need a Tomahawk missile.” She referred to the air force base and other Southern Arizona military assets as “National Security Treasures.”

She trotted out tired half-truths and lies about the Affordable Care Act (ACA), including the “death spiral” myth despite the fact that individual marketplaces have largely stabilized and all counties in the U.S. currently have at least one insurer participating in the marketplace.  Never did she mention the American Health Care Act (AHCA) that she so vigorously supported: the exploitative bill that used the struggles of the ACA marketplaces as a rationale to cut $834 billion from Medicaid.

It was as if this bit of history, her infamous AHCA fight song “let’s get this f@#$*^ thing done,” had never been uttered. That she never had what I imagine were late nights working on garnering support for drastic cuts to a public program to fund tax cuts for the very wealthy.

Instead she framed the health insurance reform “problem” as between two “sides”, those who want full repeal and those who think the ACA is perfect and should be protected as President Obama’s legacy. I don’t know about you, but I’ve never heard anyone defend the ACA as perfect or that it should remain simply as testament to a legacy. The public defense of the ACA was a defense against the devastating consequences AHCA, the bill she supported, would have engendered: millions (23 million) losing coverage, drastic cuts to Medicaid, increasing costs particularly to older and rural adults. She desperately tried to pivot, spending at least 10 minutes describing her work with the problem-solvers caucus on health care reform. The end result of this effort is a short 5 points of agreement. No details, not policy, not a plan.

We won’t forget her vote on the AHCA, or her support for environmental deregulation and gutting consumer protections that earned the Chamber’s award. She is desperately pretending she is bipartisan and moderate and that the president simply doesn’t exist. Nor will we forget what she didn’t say.

She didn’t mention the AHCA.

She didn’t speak the words “President Trump” or “the President’s agenda.”

She didn’t talk about her vision for Tucson, Pima, or Cochise County.

She didn’t tell us what she planned for her legislative focus once the August recess was finished.

She didn’t talk about the possibility (now a reality) of a ban on Transgender military service-members.

She didn’t talk about immigration or the DREAM ACT of 2017 or the possibility that the President ends DACA.

I’m not sure that she ever said “we.”

This event was supposed to be a legislative update. Instead, Martha McSally used her time and her words to campaign. The friendly business group in the room learned nothing new. The constituents in the room, including me, left feeling hollow. 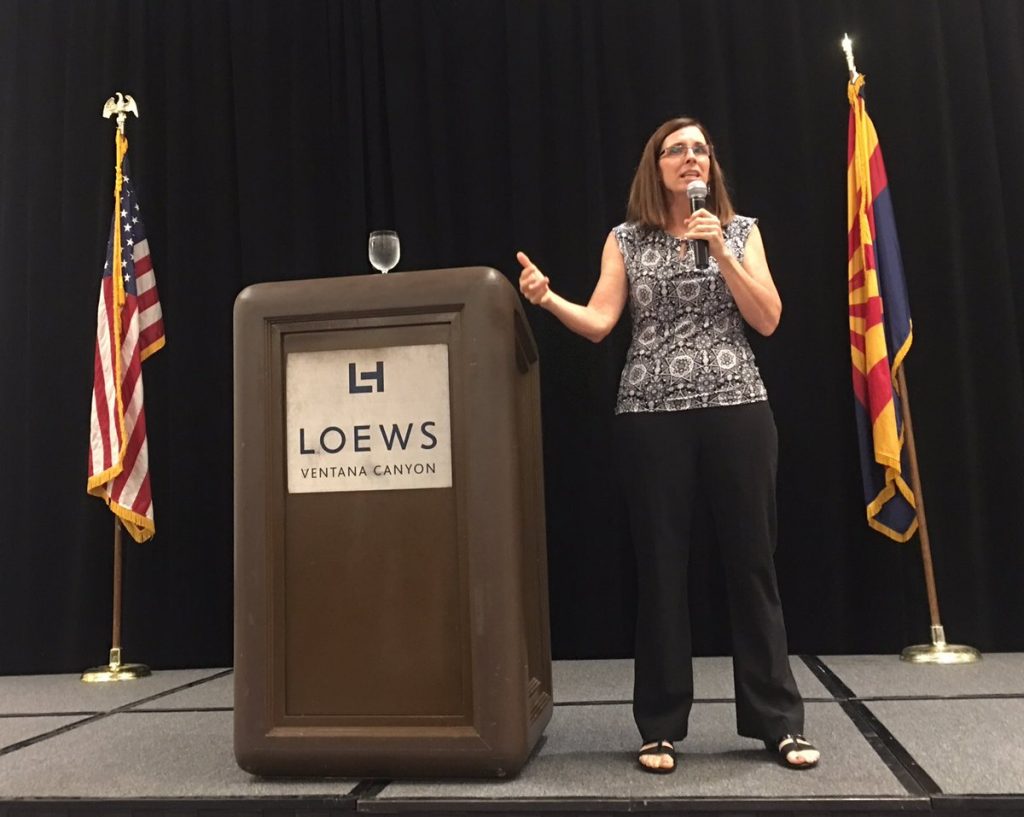