McSally to Bankers about A-10s and Trump meeting

Let’s talk about McSally’s speech to the bankers last week.

Not the part that’s already gotten national media coverage. The part they glossed over ~ where we finally learn exactly what she thinks of President Trump.

The relevant portion is right around 18:00, when she tells the story of her very first conversation with Trump, in the Oval Office.

“Then he asked me, ‘What do you think about the F35 program?’ because he’s talking about how he saved all this money (unintelligible), I don’t know if you’ve seen that. I said, “Well, that program had some problems earlier but it’s on track now.” And he said, ‘Well, since I got elected.’ I said, ‘Weeeell, it’s actually been on track for many years, sir’ ~ (laughter) ~ ‘but you may have squeezed some efficiencies out of it, that’s great.’

Already she’s made the president the butt of her joke. Then she goes further, happily boasting about how easy it was to manipulate him (at around 19:48):

Of course that tactic worked on Trump, who is famously weird about Obama. The A10 was “saved,” McSally gets big applause.

What does her story tell us about her estimation of Trump? That she considers him a buffoon and a braggart, easily influenced. She has contempt for him ~ so much so, she’s willing to mock him openly in a room full of strangers.

But it raises even more questions. How much does she (we) have to sacrifice, for her to “get a win” (her words)? She votes with him 100%, she mutes all her criticism of his dangerous foreign policy. Even if you accept that her “access” to Trump “saved” the A10, is it worth, say 400,000 Arizonans losing their health care? Who’s really getting played here?

Secondly, does she think it’s always going to be that easy? That she’ll always be in his good graces? Look at the way his own Cabinet had to grovel in front of him yesterday to keep their jobs. Is McSally prepared to do that? What if he threatens to mothball the A10? How far will she go? And what if he hears this tape of her laughing at him? How’s that going to go over?

And the last, and most worrisome question… if it was that easy for McSally to manipulate Trump (the very first time she met him!) how hard would it be for Putin? 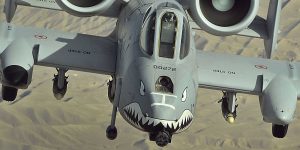